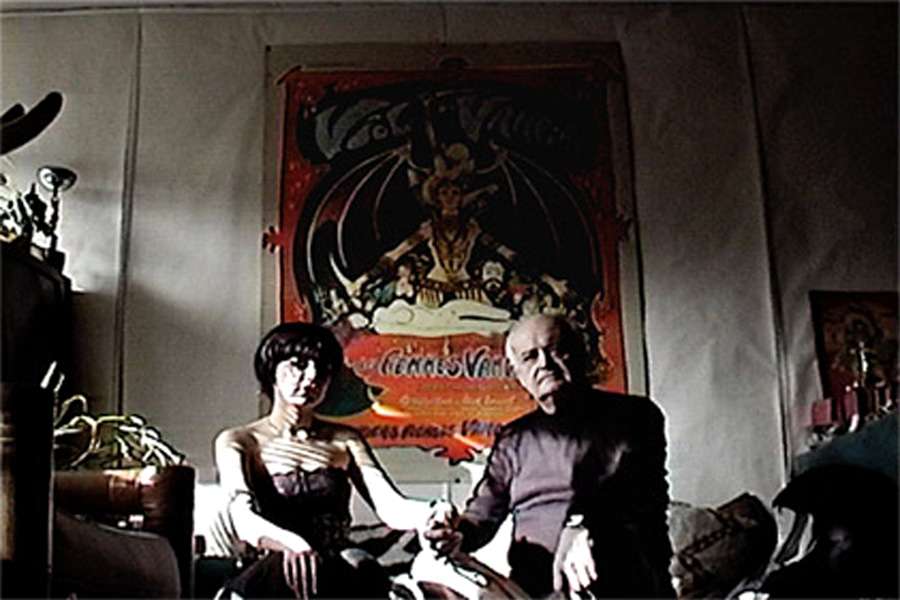 An exhibition of short videos by Aïda Ruilova

“Come to Life,” Aïda Ruilova’s exhibition of short videos, opens with the forty-five-second Tuning (all works 2002), a single shot of Ruilova seated on an ornate sofa next to an elderly gentleman. While guitar feedback drones, the image comes slowly into focus, revealing the artist and her seatmate looking as stiffly symbiotic as a couple in a Gainsborough portrait. The gentleman is Jean Rollin, director of such films as Rape of the Vampire, The Naked Vampire, and Virgins and Vampires. It's an apt beginning: Ruilova’s videos traverse the same queasy register as Rollin’s movies, shuttling back and forth between risible goth excess and moments of uncanny disquiet. The other five videos, which range in length from fourteen to forty-one seconds, resemble outtakes from slasher flicks of the ’70s. Agile editing reduces the material to the split-second frissons that contain so much of the horror in horror movies (a young girl crouched in a stairwell or looking over her shoulder with a start; the sound of someone gasping with what might be either pleasure or fear). Sound is key in this artist’s work, and here, sampled and layered bits of dialogue and ambient noise create an eerie rondelet that jumps from one video to another as they play sequentially. Ruilova was a member of the band Alva before she began making visual art, and her preoccupation with pop music—with its spectacle and sexual politics as well as its formal possibilities—is threaded through the show. In Come Here, a tall young man stalks through a decrepit conservatory, snarling at the viewer. In one shot he rises from a supine position, arms thrust out in the classic gesture of a mummy waking from the dead. His gold-spangled military jacket and Alice Cooper facial expressions seem to indicate that this monster is a rock star—or at least, he thinks he is.