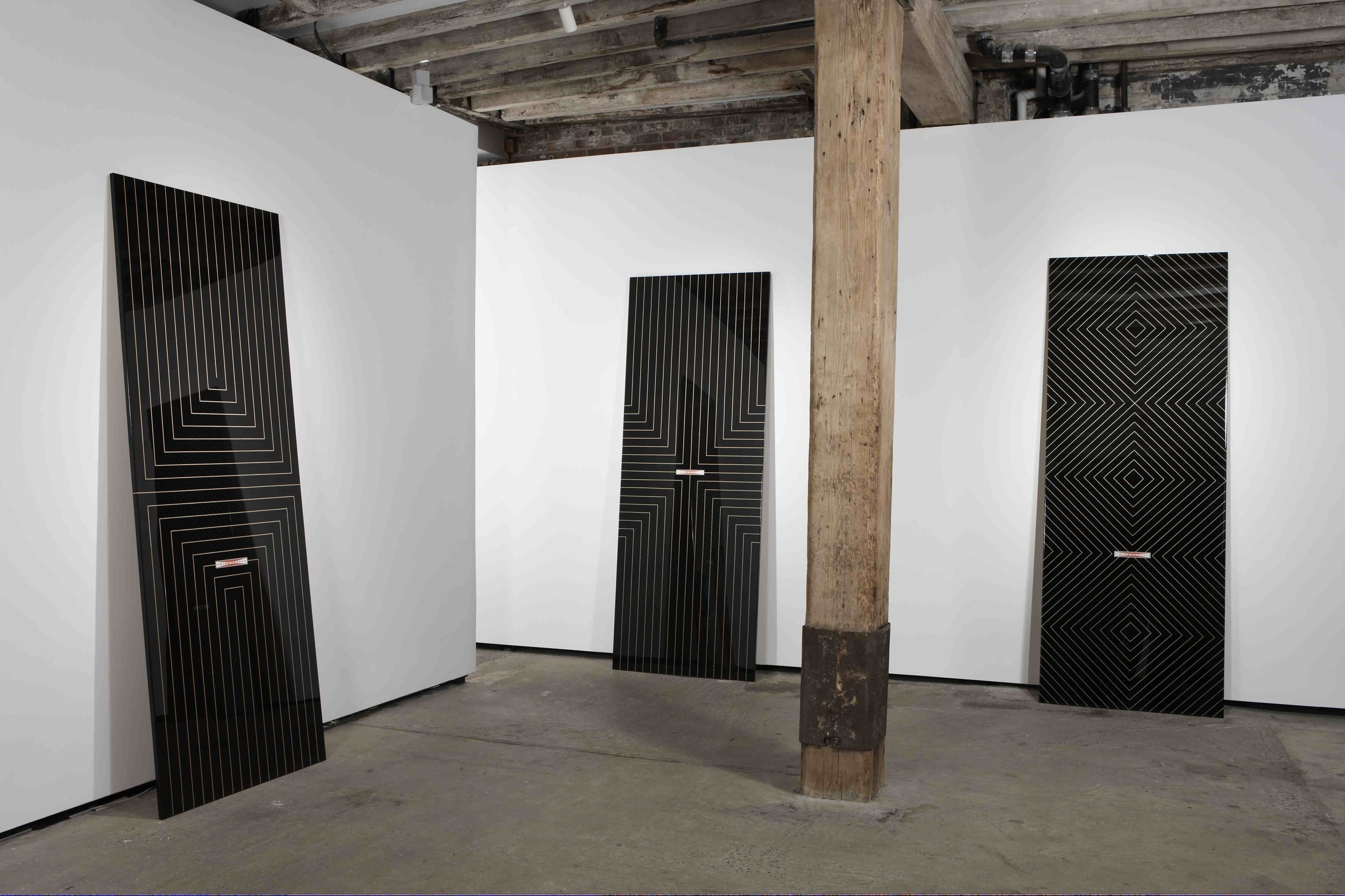 Salon 94 is pleased to present Black Boards, White Chicks, part II, an exhibition of new work by Peter Dayton. Peter’s work pays homage to the high culture of post-painterly abstraction and the popular culture of surf art. The centerpiece of the show is a 10’ high lacquered black surfboard fin, flanked by a series of paintings leaning against the wall like discarded objects.

The black paintings are from Dayton’s surfboard series, rectangular wood panels decorated with motifs from Frank Stella’s iconic black paintings of the 1960’s. Meticulously hand-crafted and raised to a high gloss sheen, the surfboards draw upon the formalist Modernism championed by Clement Greenberg, the Finish Fetish movement of 1960’s Los Angeles, Appropriation art from the 1980s, as well as the artisanal ethos of a much lower end of the culture, that of the surf bum painstakingly shaping a board in his workshop. These works are joined by his new series of Bad Girl boards, candy-colored striped confections, punctuated by decals declaring their prepackaged rebellious spirit as commodified in current surf culture.

A lone painting of the feminist art pioneer, Carolee Schneeman posing naked except for a snake draped over her shoulder, hangs defiantly with the boards. Back-of-the-magazine graphics from 900 number sex hotline ads along with the slogan, Player, are placed provocatively on the canvas. Like Richard Prince’s Girlfriend series, which fixes an ironic eye on the subculture of biker girls through the appropriation and de-contextualization of their imagery, Dayton’s White Chick paintings isolate the sexism inherent to surf culture (and Minimalism) and turns it on its head by using as his centerfold an artist who has successfully controlled her body imagery.

Since the 1990s, Peter Dayton has garnered a national reputation for his collaged flower paintings that reference the psychedelic era of Andy Warhol as well as the slick 1980s consumer culture exemplified in the work of Jeff Koons. He holds a BFA from Tufts University and the School of the Museum of Fine Arts, Boston, and studied at the Rochester Institute of Technology (with Nam Jun Paik), and the Master Workshop of Fine Arts, Southampton, New York. The Houston Museum of Fine Arts and Guild Hall Museum, East Hampton, New York has collected his art. Born in 1955 in New York City, Dayton currently resides in East Hampton, New York.