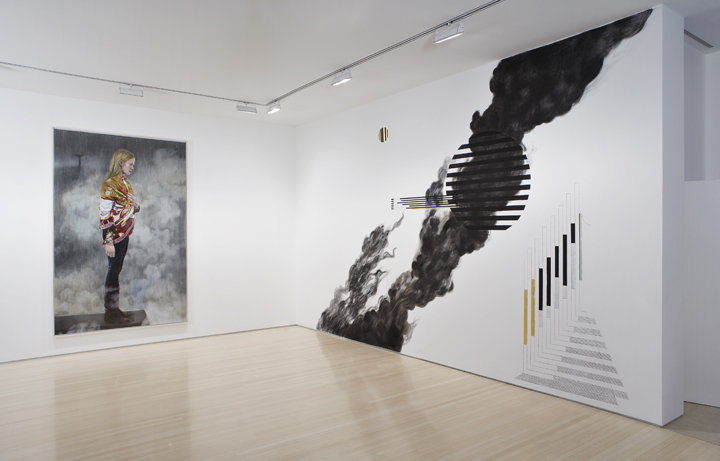 Van Dongen works with layers of color pastel, often buried beneath black charcoal pencil. The delicate surfaces appear as if they might blow away like dust. Van Dongen, trained as an etcher, channels the brilliant colors of the Pre-Raphaelites –who attempted to give their colors a jewel-like clarity, with the darkness of Dürer’s etchings. Here, color barely radiates, and her subjects are forever surrounded by a melancholic patina.

Iris van Dongen, portrays ethereal women, living both in the present and in the past. Their poses mimic Pre-Raphaelite and Art Nouveau paintings, as well as contemporary photography and advertisements. Set within forests, clouds and webs, these contemporary goddesses stand strong and confident, yet absent like ghosts, as in Carpe Diem (2005). In this large-scale drawing, a young woman stands in the middle of the picture on a stone slab (or grave) looking out to the distance, a gazing pose in profile reminiscent of Romantic paintings. Her strong hands grasp a colorfully drawn scarf that contrasts with the fragile heroines of Klimt..

In Salon 94, Carpe Diem faces three vertical drawings of a blond, brunette and a red headed woman, that form a triptych. In each their heads are stretched upward- in a state of vision. The heroine of Double (2005) stands with her neck offered in front of an ad for a vampire flick. Goth culture and fairytales co-exist in order to make her portrait immortal. Van Dongen deliberately uses a fashion photographer’s pose that expresses the longing, vulnerable woman. Yet now, her subject is self-assured- almost mockingly offering herself to a paper vampire. It is she, who posses the power.

In Vision (2005), the second panel of the triptych, a contemporary garbed girl looks up in a state of revelation. The boxes and forest surrounding her are lifted directly from a John William Waterhouse (1849-1917) painting entitled Pandora. During the Pre-Raphaelite era Pandora encapsulated male ambivalence about women’s thirst for knowledge. Van Dongen, copying Waterhouse, follows the convention of showing the world’s evils escaping from a chest, on which is chased a sun rising over water, symbol of the Hermetic Order of the Golden Dawn. While Van Dongen’s women are stripped from the fate assigned to them by tales and mythology, they never escape the artist’s feminist humor.