Another Thing You Did To Me | Salon 94 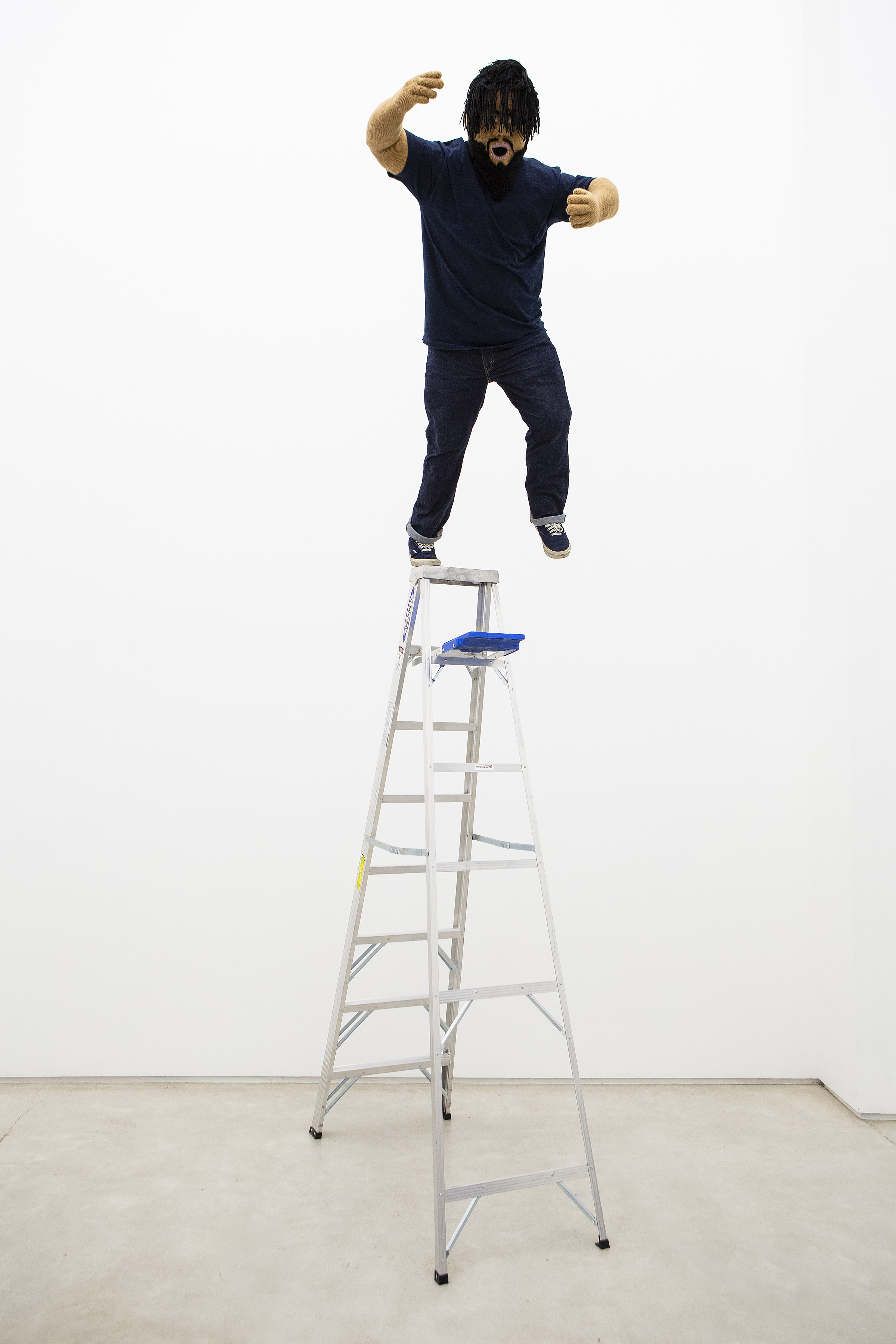 Another Thing You Did To Me

Salon 94 is pleased to announce our representation of Los Angeles-based artist, Luis Flores, whose inaugural exhibition at the gallery will open on March 5th, 2019.

Flores is recognized for his hand-crocheted, life-sized “doppelgangers”. Standing high on a ladder, balanced mid-air, or violently being slammed to the floor, several of his soft self-portrait sculptures will fill the gallery this spring.

Growing up in a relatively “machismo” Latin American household in Northeast LA, Flores was acutely aware that the men in his family learned to dismiss empathy and sensitivity. It was only while collectively imbibing that it became socially acceptable to access their softer natures, which often involved an uninhibited, dramatized release of emotion. This scant self awareness and the daily artifices of the male interaction repeat through Flores’s doubling and tripling of his own likeness.

The title of the exhibition is a reference to a recent conversation between Flores and his father, during which his father asked the artist to list everything he had done to him throughout his upbringing that had resulted in a negative impact, intentional or not. Through that conversation Flores drew parallels between his childhood and those of many men he knew, including his own father. While the title operates on a personal level with regards to his own relationship with his father, the words leave room for the viewer to project themselves into the work while speculating who the “you” and “me” could be. The title could also refer more broadly to the nurture v. nature dynamic that who we ultimately become is the sum of not only who we are inherently but how we are raised within a particular family or society. Flores views the wrestlers as not only representations of himself, but also as his father, his mother, his brother, his wife, his friends and anyone else who has affected his life in some way and make up who he is.

While absorbing the behaviors of men, Flores immersed himself in the emotional strength of women, in particular, his mother. While he is self-taught in the art of crochet, his interest in the medium stems directly from his mother’s interest in it when she was young. Flores first encountered crochet in contemporary art practice when he was studying at UCLA. While enrolled in a class on New Genres taught by Barbara Kruger, she encouraged him to see the exhibition, WACK!: Art and the Feminist Revolution at the Museum of Contemporary Art, Los Angeles. It was there that he became exposed to materials and methods, primarily regarded as “feminine”, that he hadn’t seen widely used before and became interested in their use in his own work. Additionally, Flores is highly influenced by historic works such as the Hellenistic bronze sculpture, the Boxer of Quirinal (artist unknown, c. 330 to 50 BCE) and Gustave Courbet’s The Stone Breakers (1849). He views these works as a foundation for the cyclical relationship to the masculine in art history. Employing this imagery and using additional tropes the likes of George Segal’s blue collar worker and Duane Hanson’s tourist, Flores has invented his own figuration to tell his story.

Flores views these self-portraits as endurance pieces used to confront conflicting identities. He uses his physical body and face to first study (often in front of a mirror and through photographs) and then enact specific male gestures, holding them for a prolonged period of time. In an act of trust, his wife--a nurse by trade--tapes, binds and wraps Flores from head to toe to make each mold. This duality of not only a traditional female craft but also a traditional female role, used to create Flores’s aggressive “pupp-Ids”, is at the heart of his practice. The casts are hollowed shadows of himself, ultimately filled, weighted down, stabilized, and covered from head to toe with the crocheted skin that vaguely resembles himself. The ensemble behaves as a performative receptacle of bad behavior, becoming creatures of habits that aren’t necessarily his own. For the first time in this new body of work, Flores will introduce a female figure within the ensemble. She will act as a kind of critical observer playing the roll as either the “you” or “me” in the title. We are currently witnessing a paradigm shift in the power dynamic between men and women and Flores enjoys problem solving. His homunculi act as the perfect puzzle pieces to work through what “being a man” could mean with the advent of the #metoo movement and in a climate of widely open discussions surrounding #toxicmasculinity.

Flores dresses himself in true life and his art, in what has become his uniform of choice: Levi’s blue jeans rolled at the cuff, a navy blue crew neck t-shirt, and blue Vans sneakers. Like seeing Gilbert and George on the street, passersby find themselves doing a double-take seeing him beside his sculptures. Flores has been donning the same uniform for nearly six years and has described it as a tool used to inhabit many places at once through the commodification of his likeness. He has said:

“The Uniform came through my interest in the power of persuasion through repetition. I would often think about the way artists like Vito Acconci used repetitive phrases in his videos and the way they operated, almost as if he was trying to persuade or convince the viewer of the things he was saying. I also think about the way brands work; the way a symbol can become powerful in its repetitive usage coupled with a product of some kind. These symbols over a period of time become familiar and become a kind of truth for those who are exposed to them”.

His wrestlers beg us to discuss Patriarchy and the constructed ways of thinking that perpetuate the masculine gender roles as unemotional, vulgar, sexually aggressive and violent. Through these works, Flores investigates these constructs and asserts that like his figures, human history repeats itself, not just through monumental events like war and man-made disaster, but through small, personal, and familial acts. Masculine constructs are traced cyclically through art and life. Throughout a vast society, down through neighborhood pastimes, and into the lineage of a single family, we witness the cyclical patriarchal pattern unbroken. Flores’s effigies call attention to this constant regurgitation, acting as the conduits he needs to break these inherited cycles, through himself.