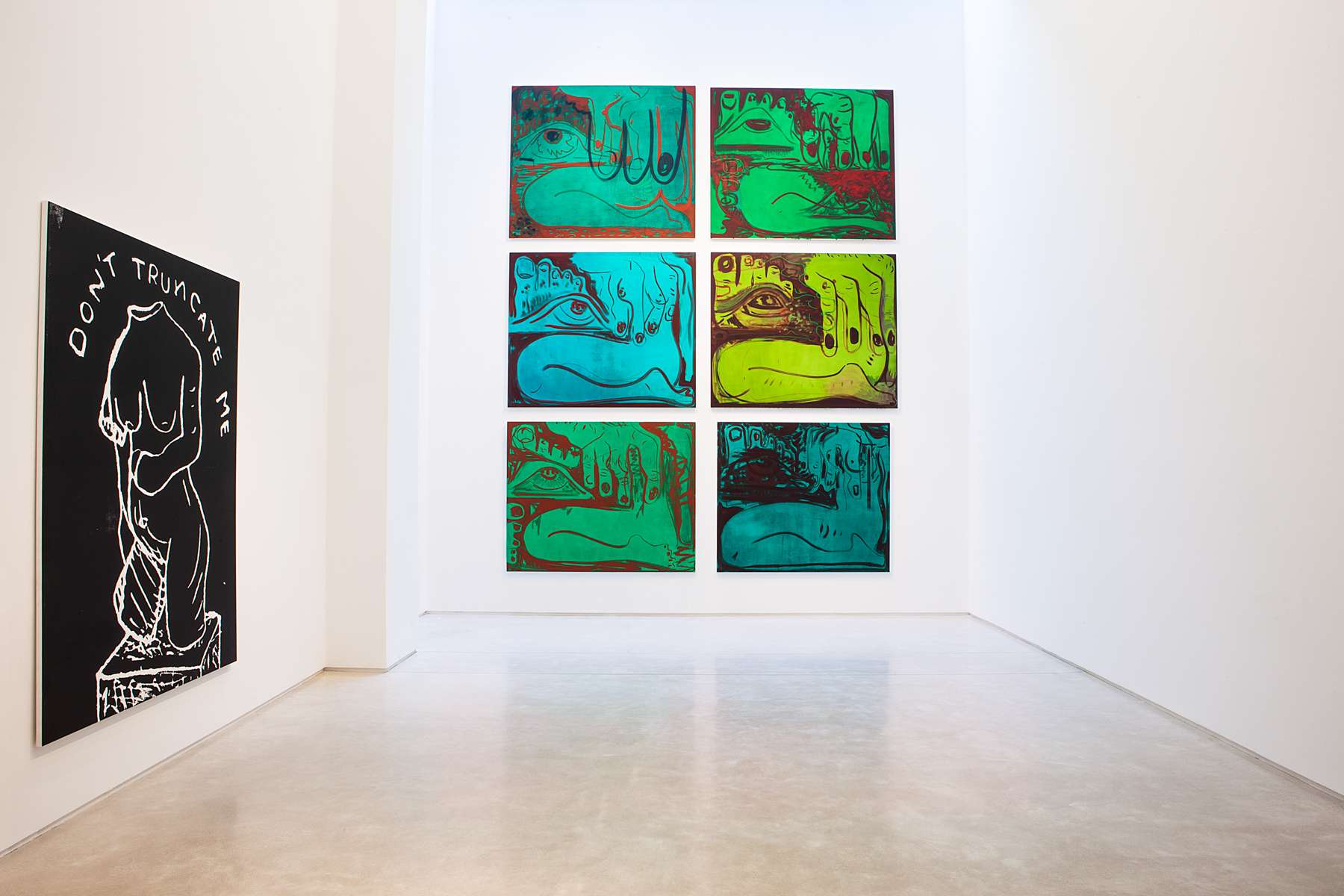 Amy Bessone In the Green Room

Amy Bessone mines the cultural representation of female form in history, from Greco-Roman marble nudes and the odalisques of high modernism to contemporary thrift-store objects

​Salon 94 is pleased to present In the Green Room by Los Angeles-based artist Amy Bessone. Bessone mines the cultural representation of female form in history, from Greco-Roman marble nudes and the odalisques of high modernism to contemporary thrift-store objects. Considering the rich art history of female figuration and the concept of the male gaze, Bessone meditates on the dichotomies of form and gender, high and low, still and moving.

Bessone presents several red on green paintings of a single female figure fitting the canvas frame in a truncated foot-to-neck seated profile view. Bessone uses the body as a framework and motif to repeat and reconsider. Bessone insistently re-adjusts the figure and color in each composition to both sustain a prolonged interest in a single, sketchy body and to refine a serious study of the gaze through slight and vigorous variation. With subversive suggestions of only parts of a nude, the central unidentifiable figure is represented without a literal relationship of body parts to one another. A single eye, foot, or breast is detached and embellished, and in some cases, merged with unlike parts functioning like a pictograph or hieroglyph. This painterly push-and-pull allows for figures that are positioned and repositioned within single compositions, strangely shifting in scale and vibrating between two and three dimensions and painting, drawing and writing. The contrasting use of red highlights on green grounds underscores the variation, as does the juxtaposition of these canvases with one another in Bessone’s careful configuration of the pieces in the gallery. Some canvases appear black on blue, purple on green, and some a heightened crimson on jade. Bessone tweaks the degrees of hue and gestures of shape just so, in a slowly and steadily intensifying inquiry into the painted representation of the body.

With subversive suggestions of only parts of a nude, the central unidentifiable figure is represented without a literal relationship of body parts to one another. A single eye, foot, or breast is detached and embellished, and in some cases, merged with unlike parts functioning like a pictograph or hieroglyph.

The concept of “the green room” is significant as it relates to the site of rehearsal and construction for actors to prepare themselves to be viewed. Green rooms in literal practice for theater, film, and television, are rarely actually the color green—the environmental “green” is emblematic of a safe haven, where a performer takes a respite from performance and audience. Stripping down her palette, Bessone uses the color green as the flat ground to her paintings, connecting the works to mysterious etymologies and ideas about spaces of practice.

The persistent development of a figure is also seen in her short films, where the small porcelain figurines she is known for painting on a large scale are the “characters”. In Daughters of the Revolution, a flea market troupe of small ceramic tchotchkes come together and join forces to hold a protest of a few seconds duration. One stop-animation film presents drawings of sculptures in a garden enjoying a daytime interlude. In Sunny-Side Up, Venus de Milo salt and pepper shakers cheaply refashioned with small heads and oversized breasts are seen repositioned, journeying across a kitchen to perform their functional duties. The Green Head considers a single sculptural head through different lenses, filters, and lights, like Monet’s Haystacks via the various filters of smart phone camera apps. The videos can also be viewed as moving portraits, slipping into still-life and taking up the concerns and genres of traditional painting. In conjunction with the paintings and videos, Bessone developed a series of ceramics, silkscreens and vinyl prints in various sizes that reiterate ideas about obsessive rehearsal and insist on a variable material, scale, and shape of the female body.

This is Amy Bessone’s second exhibition at Salon 94. Bessone was born in 1970 in New York, and lives and works in Los Angeles. She has mounted recent solo exhibitions at David Kordansky Gallery, Los Angeles, Praz-Delavallade, Paris, and Veneklasen Werner, Berlin. Her work is included in the collections of the Museum of Contemporary Art, Los Angeles, Frac Bretagne, Chateaugiron, France, The Saatchi Collection, London, UK, Rennie Collection, Vancouver, Canada, and Rubell Family Collection, Miami.