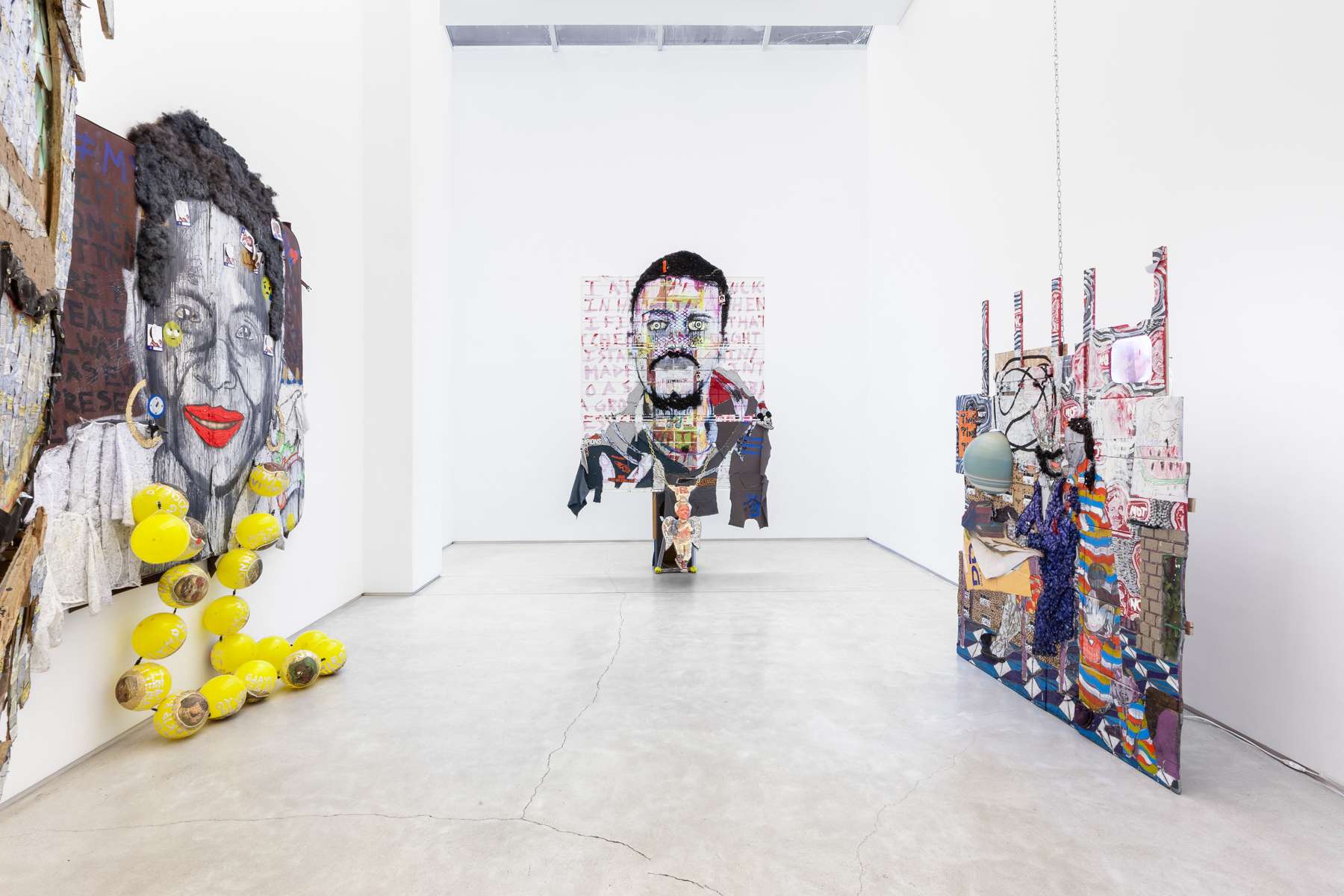 A massive, theatrical assemblage-paintings, made from discarded objects and unconventional materials, are sourced from his local surroundings.

I am for an art that is political-erotical-mystical, that does something other than sit on its ass in a museum.

I am for an art that grows up not knowing it is art at all, an art given the chance of having a starting point of zero.

I am for an art that embroils itself with the everyday crap and still comes out on top.

I am for an art that imitates the human, that is comic, if necessary, or violent, or whatever is necessary.

I am for all art that takes its form from the lines of life itself, that twists and extends and accumulates and spits and drips, and is heavy and coarse and blunt and sweet and stupid as life itself.

— Excerpt from I am For…by Claes Oldenburg

Salon 94 is pleased to present Donkey Nights, an exhibition of new work by St. Louis native, Aaron Fowler. His massive, theatrical assemblage-paintings, made from discarded objects and unconventional materials, are sourced from his local surroundings. Through a layering of castoff furniture, paint, and collaged elements including iridescent CDs, mirror shards, wigs, water bottles, LED lights and sneakers, Fowler meticulously constructs his altar-like tableaux. Religious icon painting comes to mind as do the combines of Robert Rauschenberg. In each of his layered, embellished works, Fowler constructs a personal narrative, both real and imagined, which comes alive through the materials he so carefully chooses and the subjects he celebrates. Portraits of the recently deceased, depictions of incarcerated family members, memorials to friends lost in acts of violence populate his work, as do fantastical scenarios incorporating historical figures, role models, and current public figures.

As curator Amanda Hunt has written: The urgency of Fowler’s connection to his family and friends is alarming in the honesty of its depictions. Where much of contemporary painting embraces abstract, digestible representation disconnected from the figure, Fowler provides an antidote. He grapples with a personal history that connects us to his experience as a black man – and a member of a black family – in America. He elegantly depicts those who have suffered the consequences of blackness in violent, tragic ways. Understanding and viewing Fowler’s work in the current moment – which lawyer and social justice activist Bryan Stevenson calls ‘the second era of the collapse of Reconstruction’ – is imperative. [“Future Greats: Aaron Fowler,” ArtReview Magazine, Feb/Mar 2016]

Fowler’s first exhibition with Salon 94 includes four dynamic, large-scale assemblage paintings. Jmae (2017) is a striking portrait of Fowler’s deceased grandmother, adorned with tiny, wallet-sized photos of her younger self and a necklace of plastic Emoji balls that depict images of her children and grandchildren. In the background is scrawled a Facebook post made by a member of her family, in memoriam. Another work titled A1 (2017) is a twelve-foot tall portrayal of Fowler’s cousin, Antoine (A1), a rap artist and songwriter based in St. Louis. This towering work presents A1 as a god-like guardian of the room he inhabits, and of the small winged-figure he wears around his neck depicting his mother as an angel. 3 Problems (2017), a hanging “medallion” suspended from the ceiling by two heavy-gauge gold chains, portrays Lil Tay, the head of the St. Louis based rap group, 3 Problems. Lil Tay stands defiantly in front of an armored tank, an act of resistance, and a direct reference to a medallion worn by No Limit Soldiers, rappers that signed with No Limit Records, founded by Master P (other artists on the label include Snoop Dogg, Mercedes, Silkk the Shocker, Mystikal, Mia X, Mac, C-Murder and Magic). The title piece in the show, and most recent work, is a self-portrait of the artist depicted as a donkey. This motif has become ubiquitous in Fowler’s work, acting as a symbol of human imperfection and signifying the potential for transformation. Donkey Nights refers to the darker, private narrative from the artist’s past and the experiences that have impacted who he is at present, while not defining him or dictating who he will become.

Aaron Fowler (b.1988 in St. Louis, MO, lives and works in New York and Los Angeles) received his BFA from the Pennsylvania Academy Fine Arts in 2011 and his MFA from Yale University School of Art in 2014. Upon graduating from Yale, he was an artist-in-residence at the Skowhegan School of Painting and Sculpture in 2014 and was the recipient of the Rema Hort Mann Foundation Emerging Artist Grant in 2015. Recent solo exhibitions include the New Museum, New York (2018); Diggs Gallery, Winston-Salem State University (2016); Beeler Gallery, Columbus College of Art & Design, Columbus, OH (2016); and Diane Rosenstein Gallery, Los Angeles (2016). Recent group exhibitions include the Hammer Museum, Los Angeles (2018); Savannah College of Art and Design Museum of Art, Savannah, GA (2017); Saatchi Gallery, London (2017); Rubell Family Collection, Miami (2016); and the Studio Museum in Harlem, New York (2015). Fowler’s installation,Bigger Than Me, is currently on view next door to Salon 94 in the New Museum’s storefront window through August 19, 2018 in New York. His monumental work, El Camino, is included in Made in L.A. 2018, the latest iteration of the Hammer Museum’s acclaimed biennial exhibition in Los Angeles.

During the opening on Wednesday, June 27 at 7:30 pm, there will be a live performance by rap artist, A1.