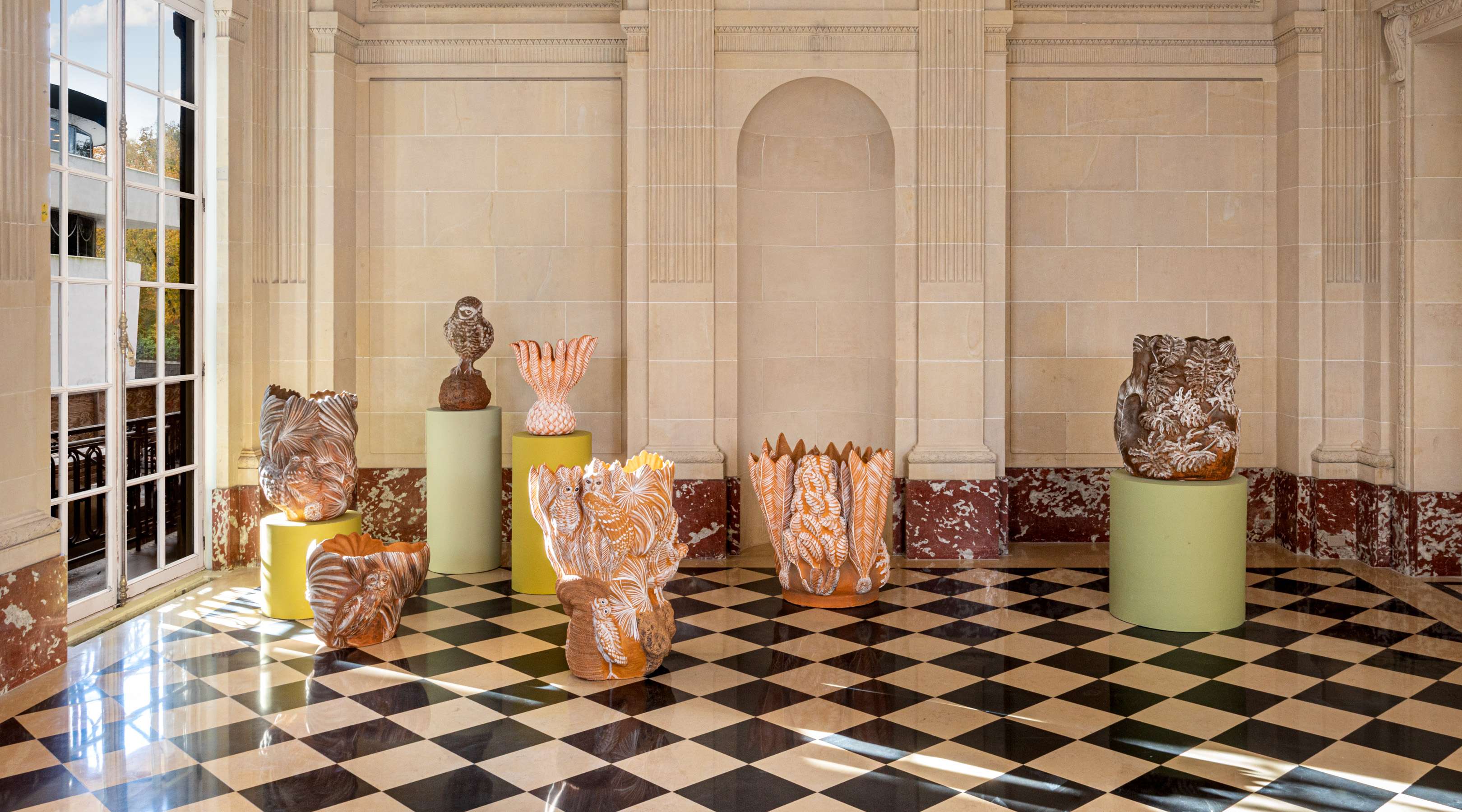 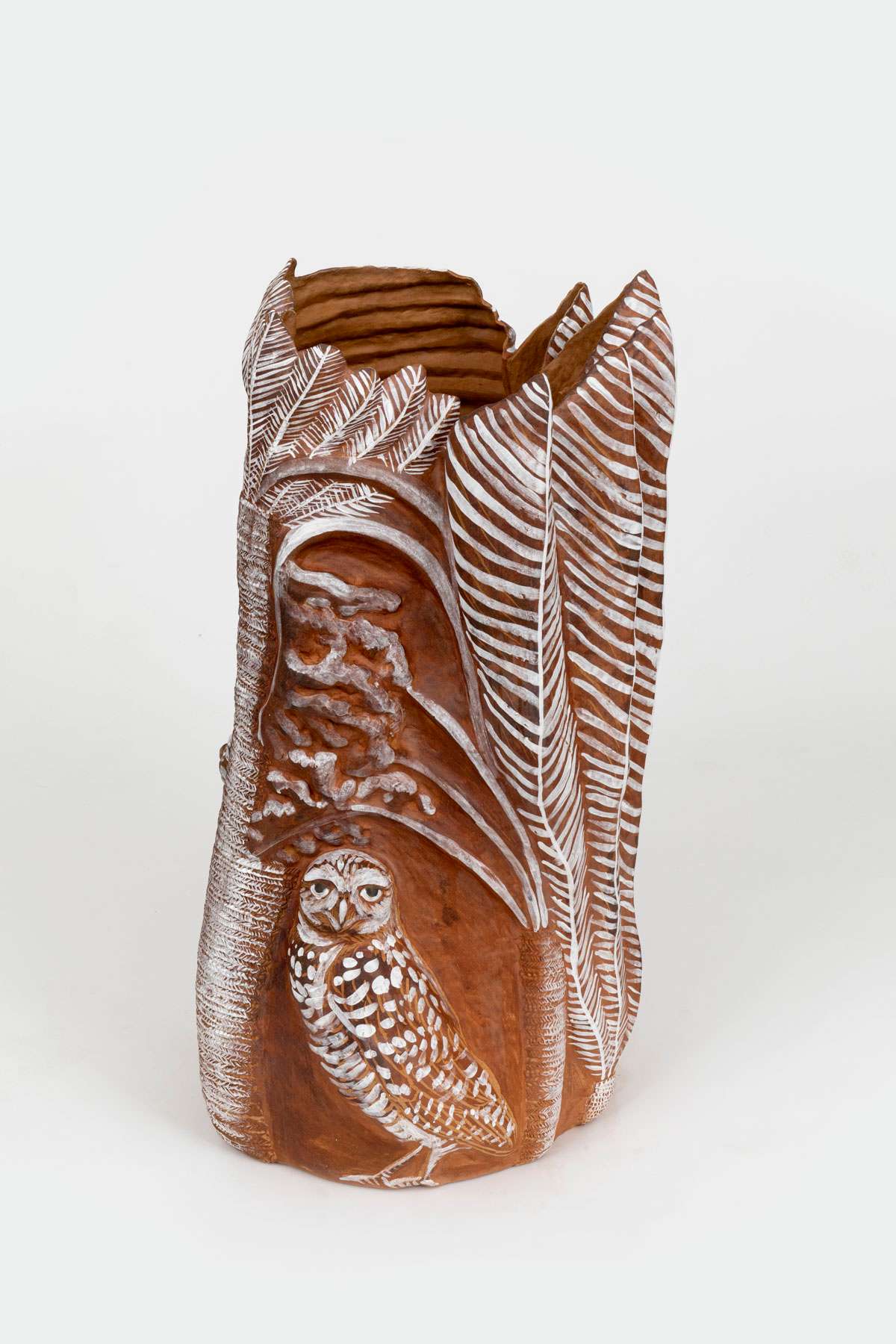 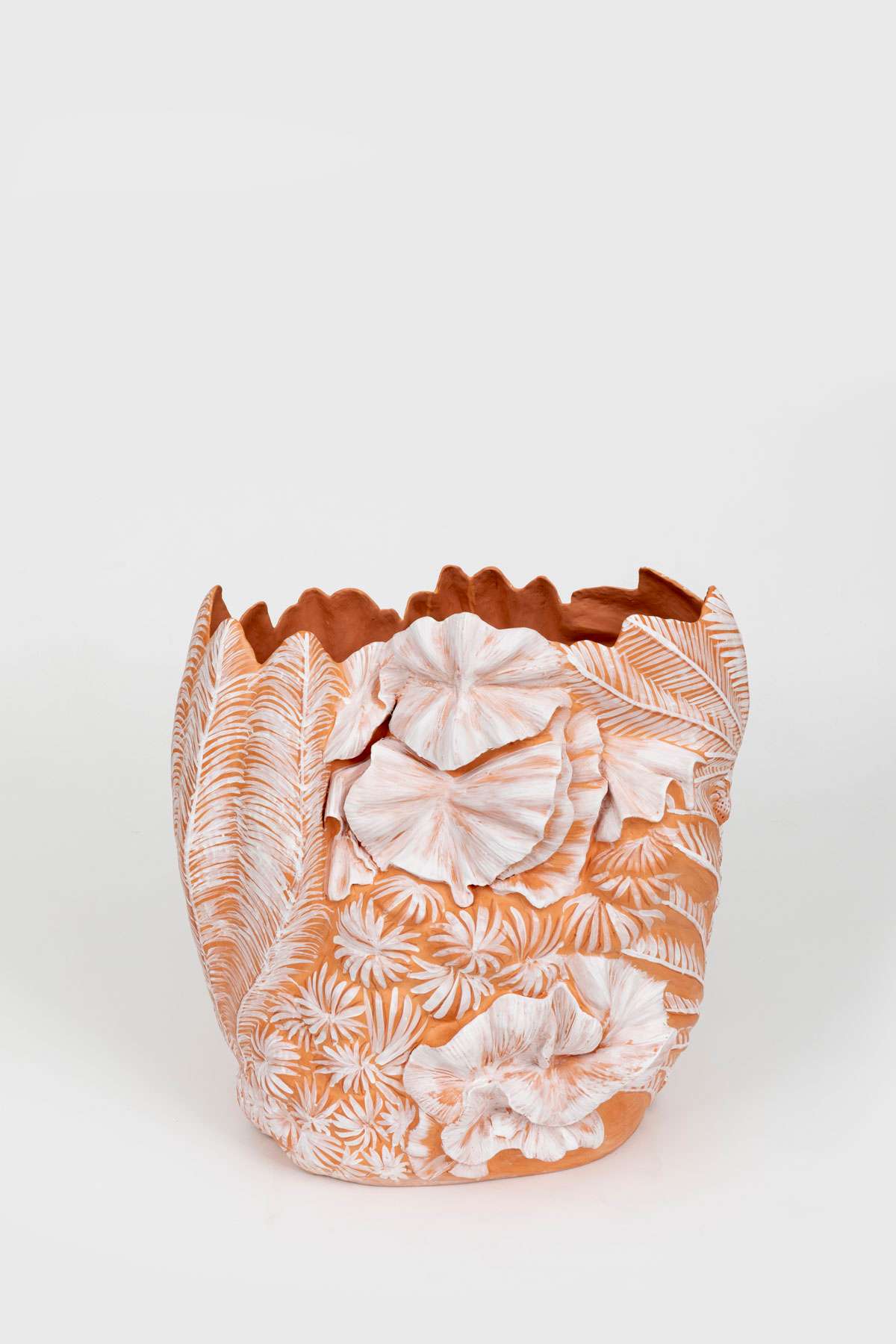 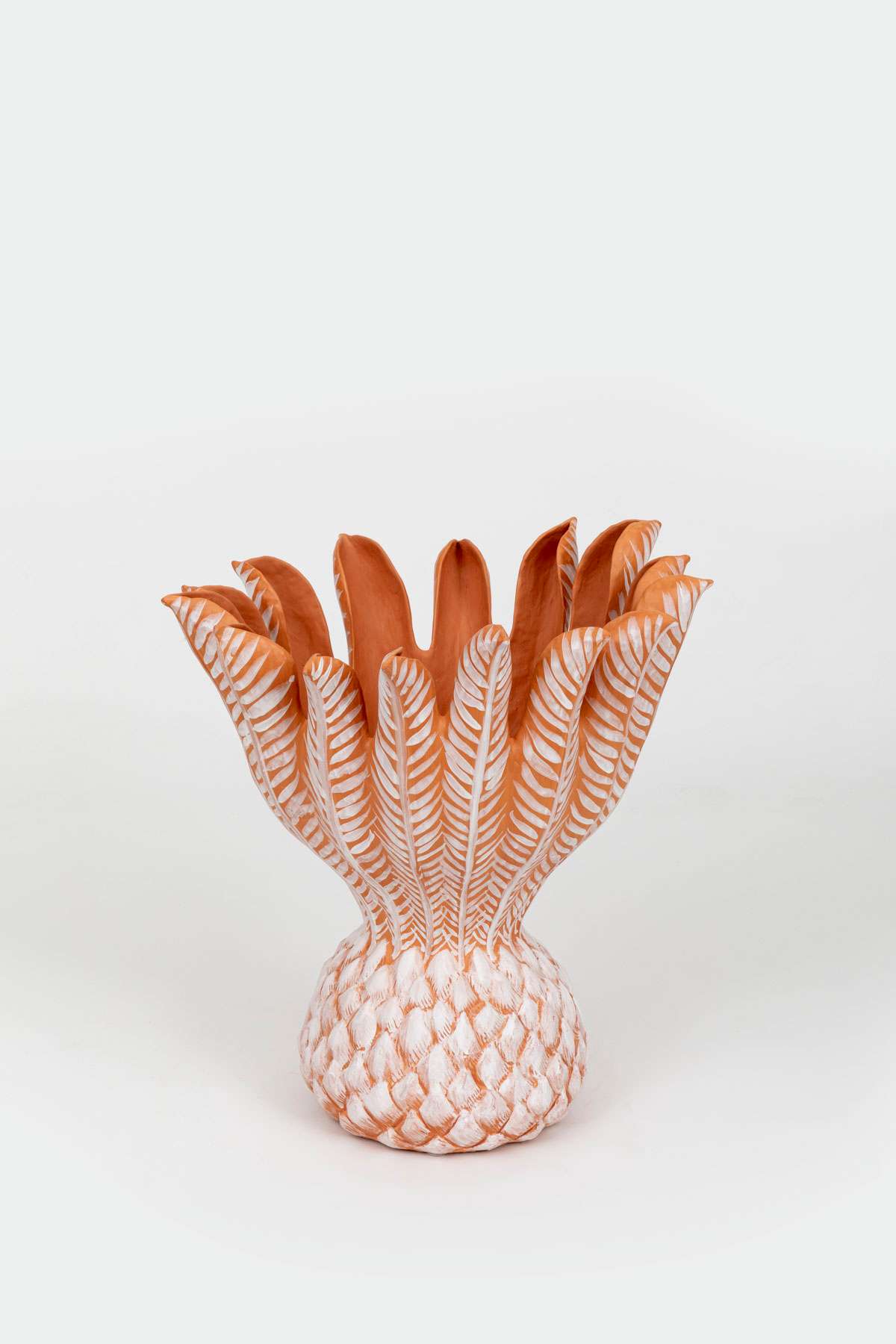 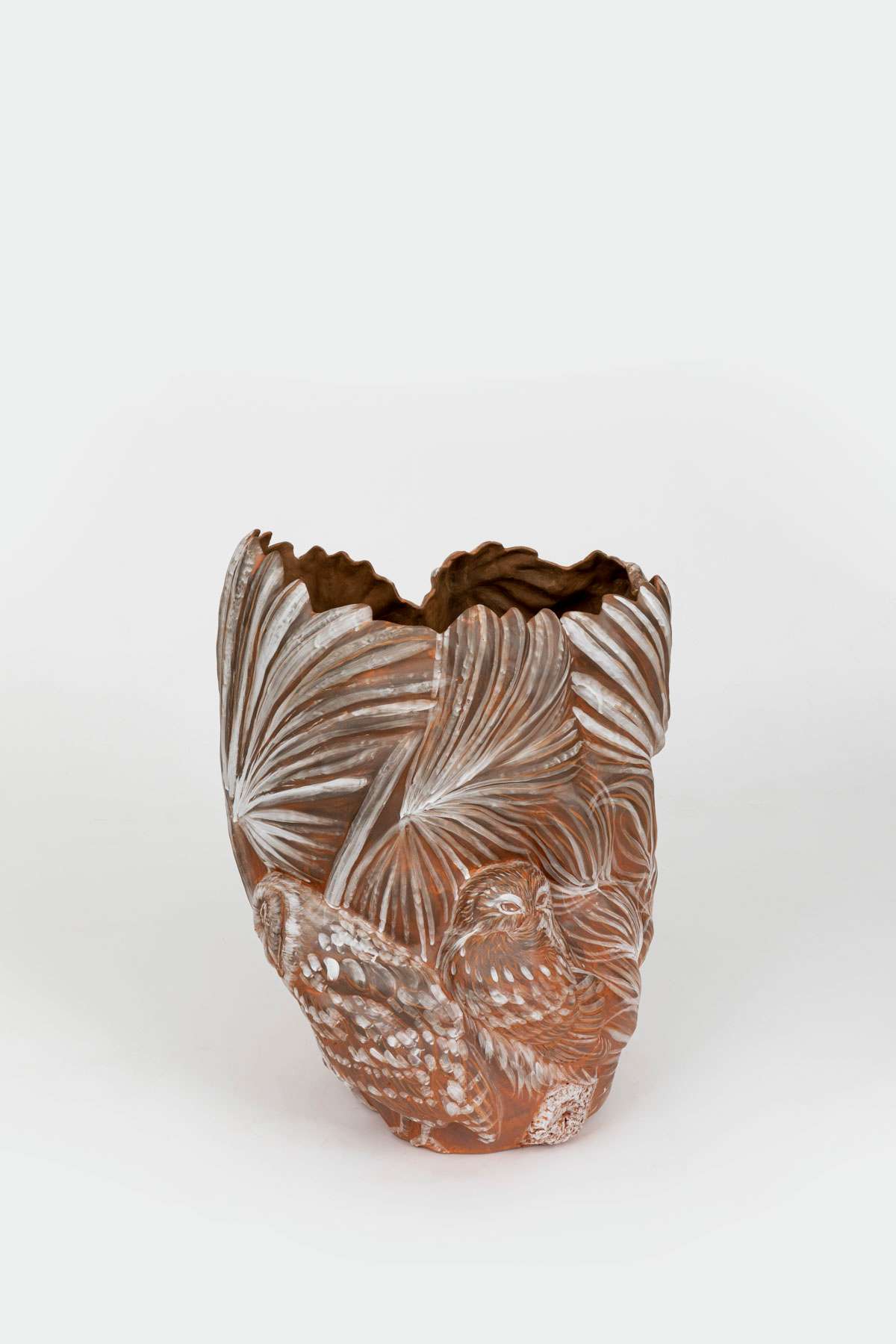 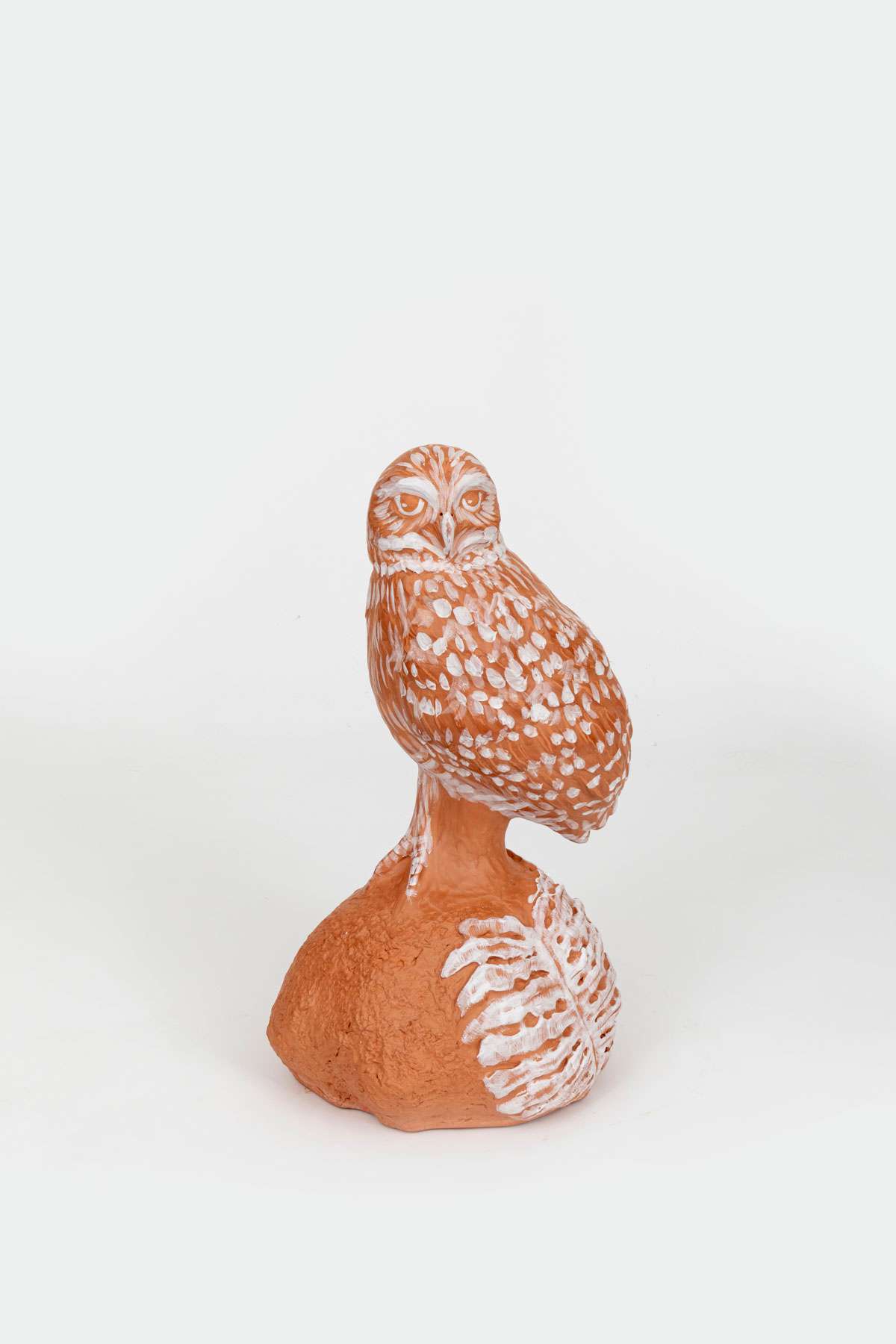 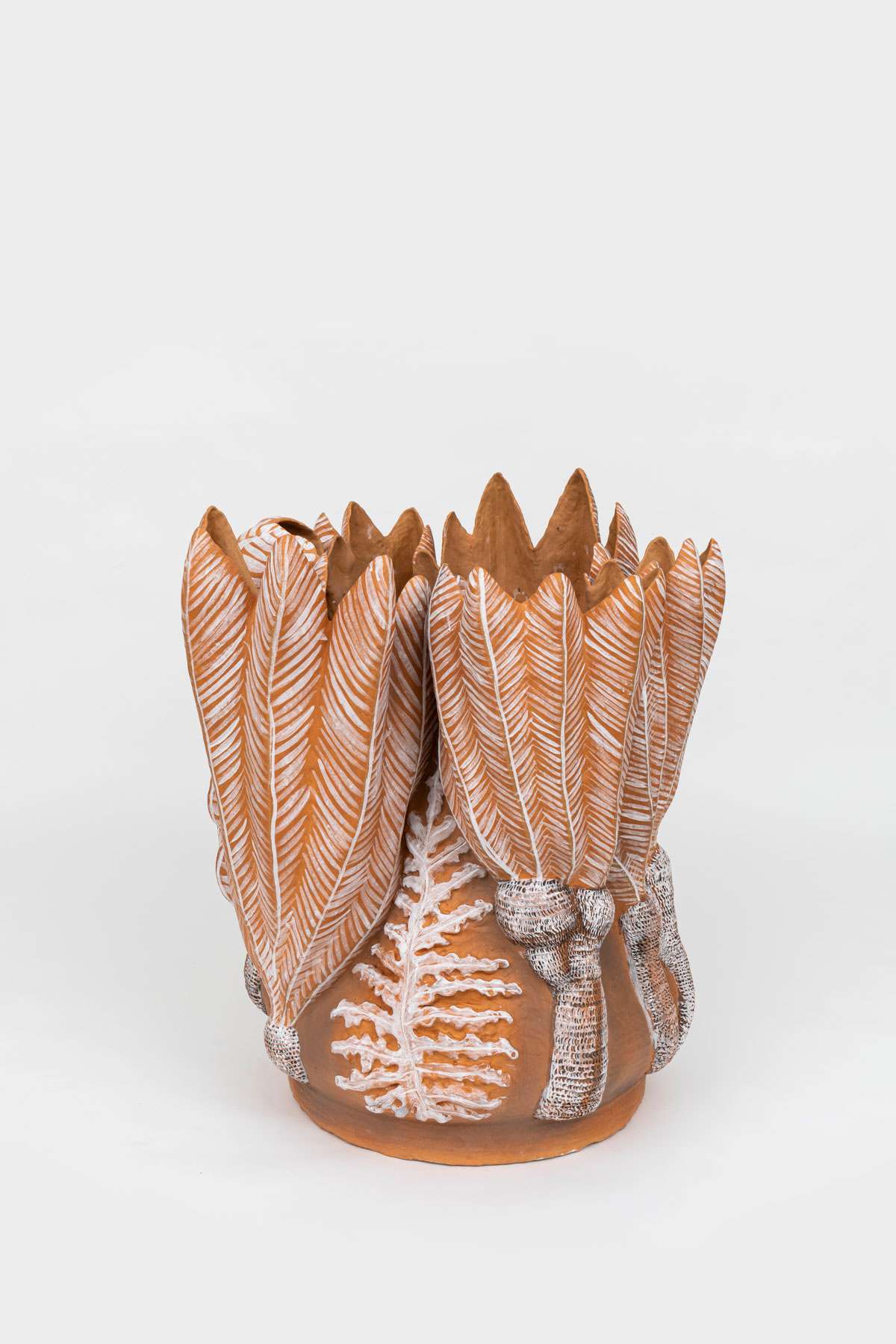 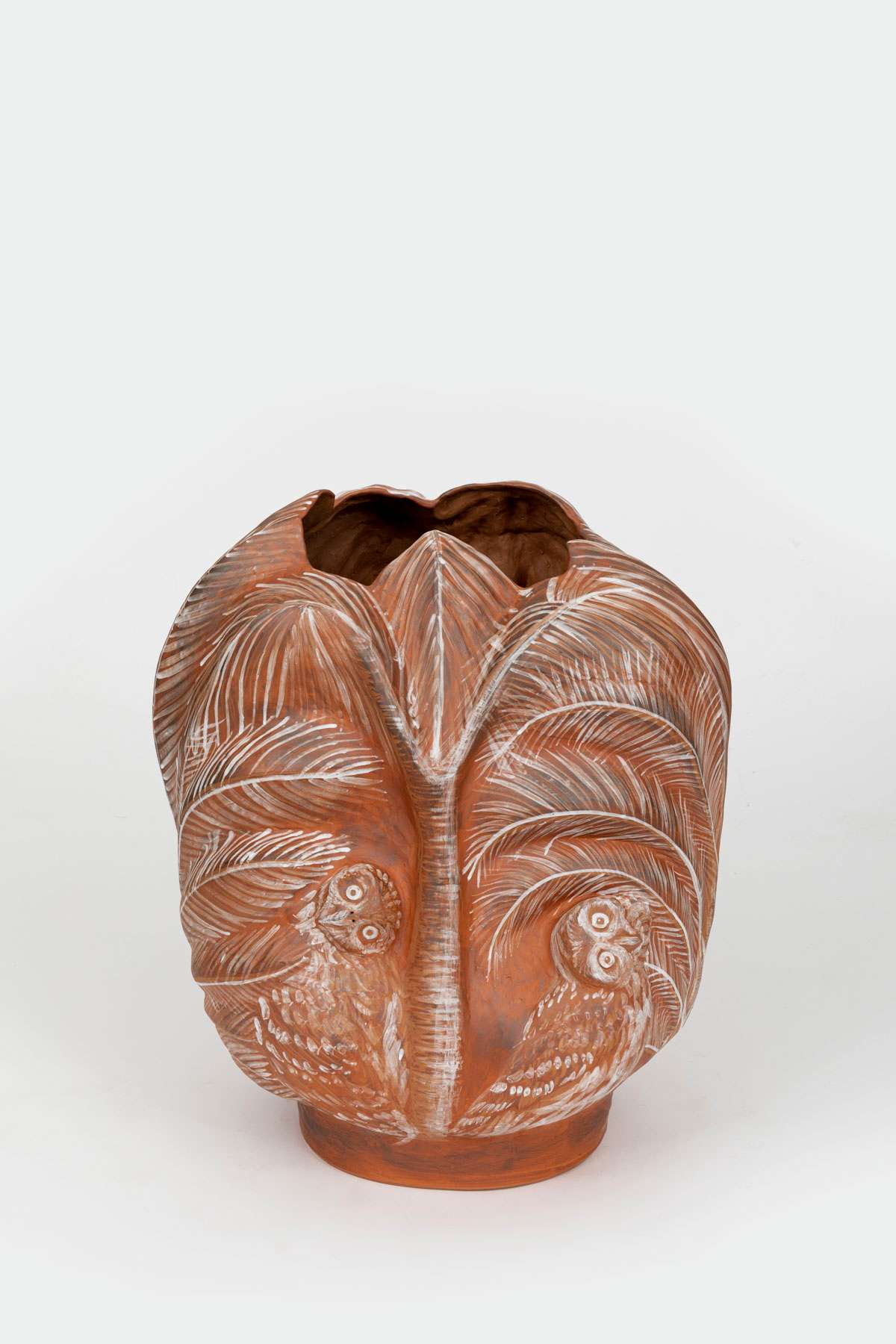 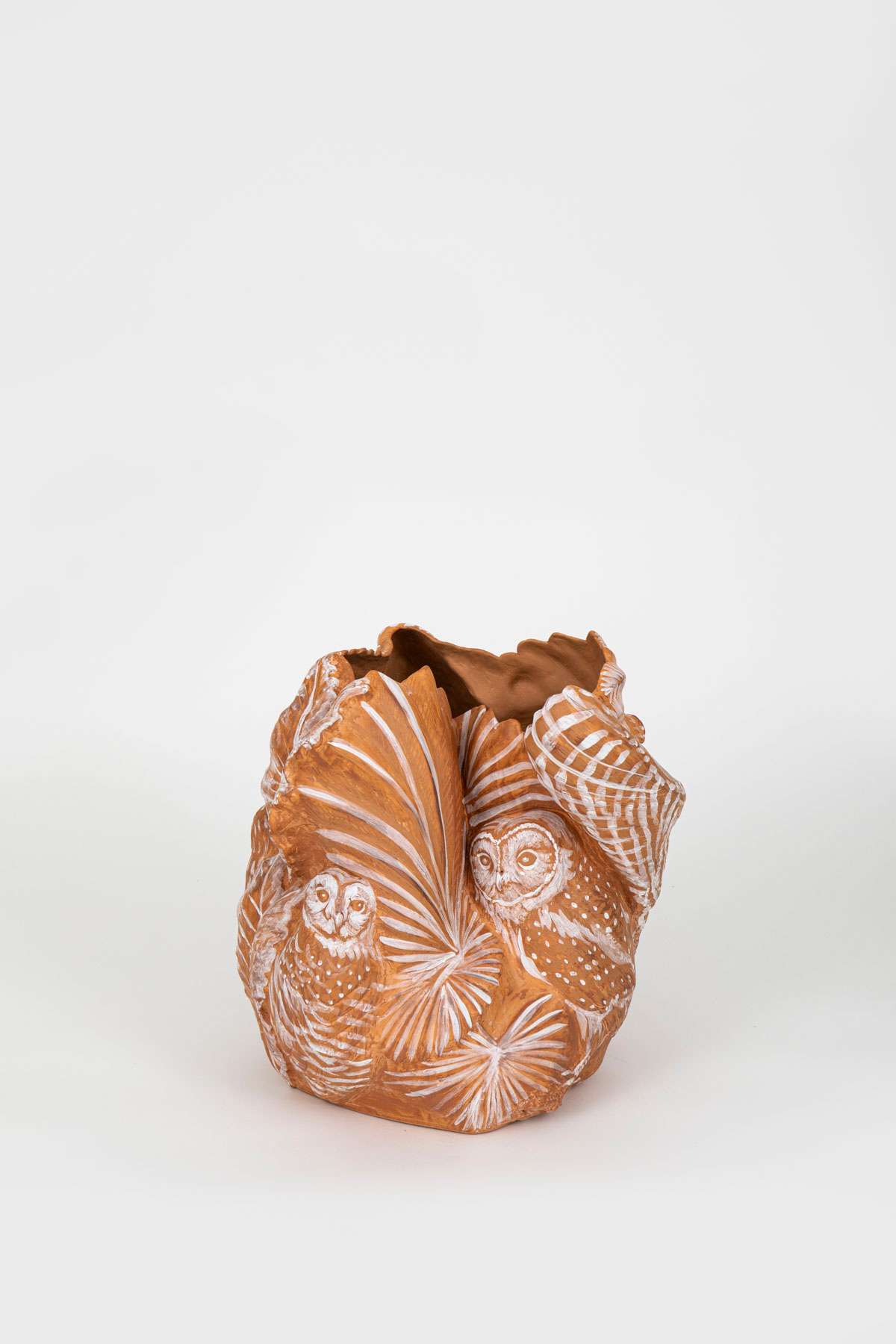 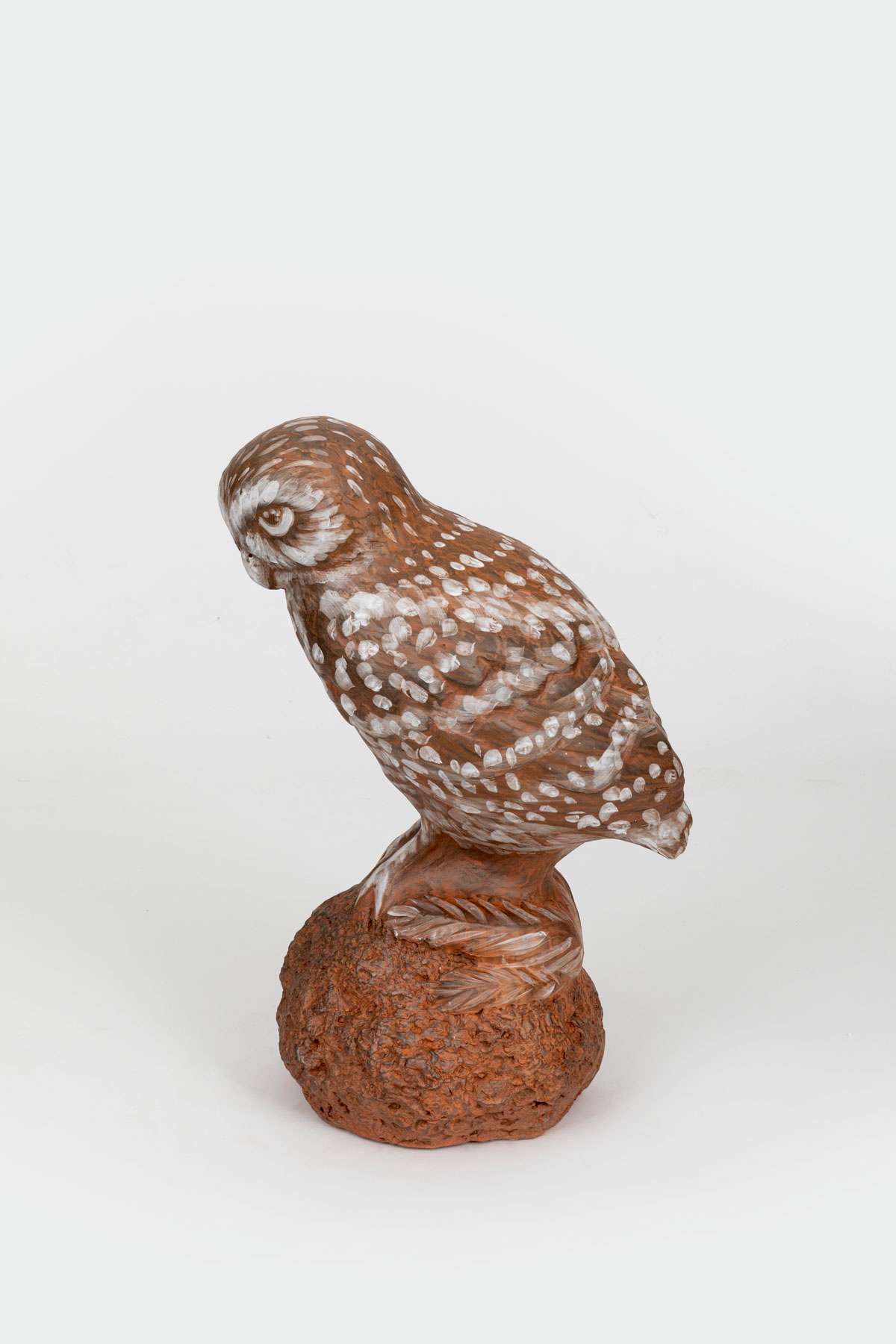 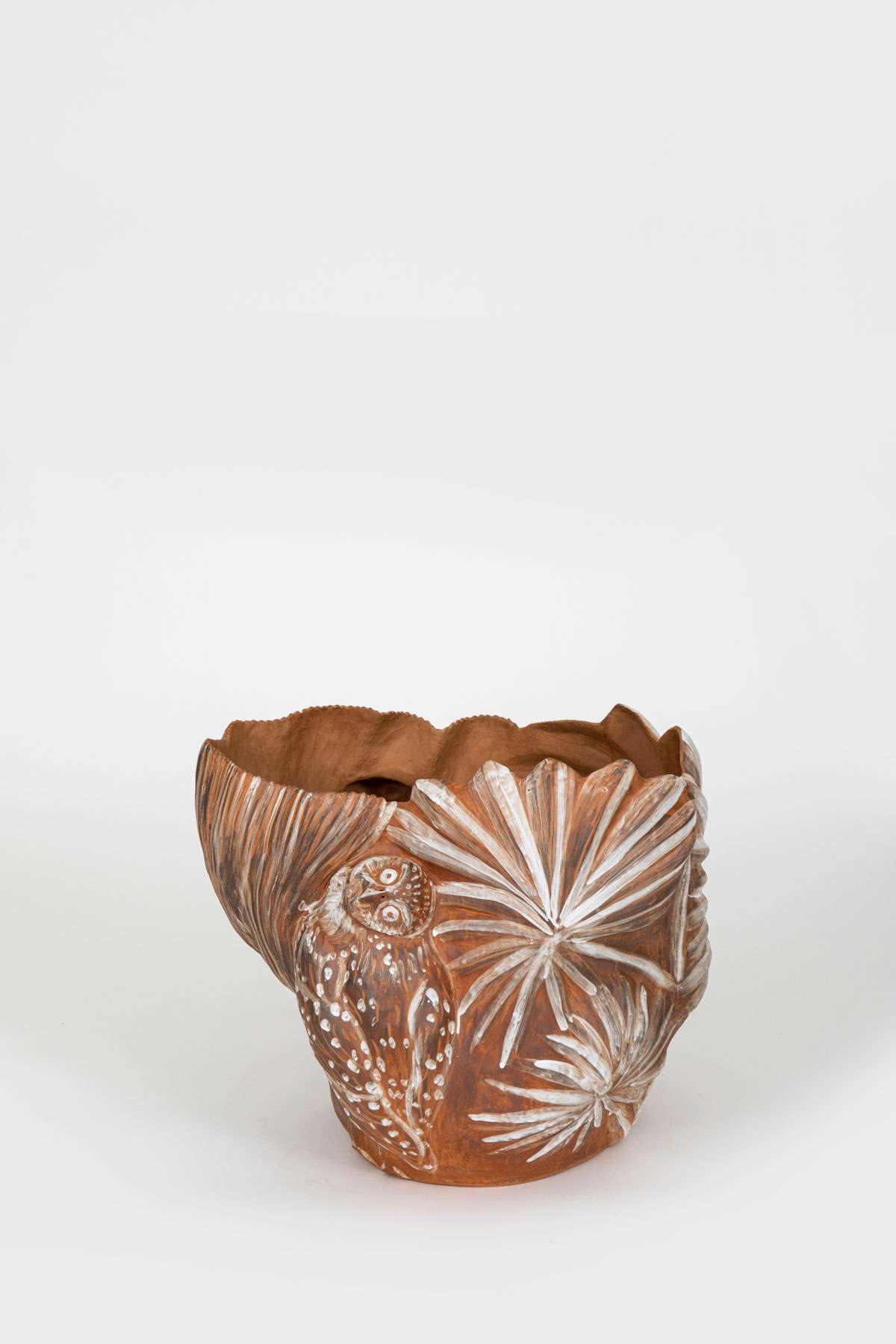 Snowy, Spotted, and Screech; Barn, Barred, and Burrowing; the Great Horned and Great Gray and Northern Pygmy. All these are types of owl, a creature most of us encounter rarely or not at all, except perhaps in the domain of mythology, as symbols of wisdom. In her recent ceramic works, collectively entitled Paradise, MyungJin Kim brings us up-close with these magical birds. They roost and hide in a depicted garden, inspired by the artist’s own – filled with rare and endangered species, some of which are over a century old and under her care and that of her partner. Cycads date to the Jurassic era, on the planet essentially unchanged for over 250 million years predating flowers in evolutionary time.

These are deep roots to draw on, made still more profound through Kim’s art. Clay is a primordial substance too, of course, formed through the slow weathering of rock into a fine-grained plastic deposit; it is the material in which humanity’s oldest surviving artworks are preserved. Kim works by hand-building with coils, itself the most ancient way to form vessels, in practice for many centuries before the advent of the potter’s wheel.

Deceptively straightforward in appearance, her undulating forms require considerable mastery to achieve. They are monumental in scale – a huge challenge in ceramics, imposing logistical challenges not only in the building phase, but also in firing and even moving the works from place to place. It was at a summer 2019 residency at CSU Long Beach’s Center for Contemporary Ceramics that Kim’s current work emerged, a startling departure from the fine work in porcelain that she had created previously (including during another residency at the Archie Bray Foundation). At Long Beach, she met and worked with Ruby Neri, Simone Leigh, and Matt Wedel, among others. During this time, Kim integrated her artistic ability to paint, draw and sculpt in singular works of terra cotta.

These years of experience are another embedded temporality in these objects. And yet, despite all of these overlapping forms of extended duration, the imagery on the pots has an arrestingly momentary quality. Kim’s owls sometimes seem startled into flight, or twist their swivel-heads around, as if made curious by our proximity. The true wonder of her work is not her easy command of multiple natural resources, but the way that each pot seems to put us in nature itself – a domain that we have endangered, but which has been around much longer than we have, and will doubtless, in some form, survive us. These are humble works of art, and also humbling, in the best sense: Kim puts us in our place.

In collaboration with AGO Projects.

For sales inquiries or to book an appointment, please write jackie@salon94design.com
For press inquiries, please contact Sophie Wise at sophie@companyagenda.com